Fall is the perfect time to take a stroll and explore the city, so in today’s post, we continue our series about Boston’s distinct neighborhoods with its oldest community: Charlestown. Reminiscent of Back Bay and Beacon Hill, this historic waterfront neighborhood looks like a quaint New England town within the city and offers unparalleled views of Boston, plenty of historical sites, as well as great coffee shops, restaurants, and parks for visitors to enjoy. 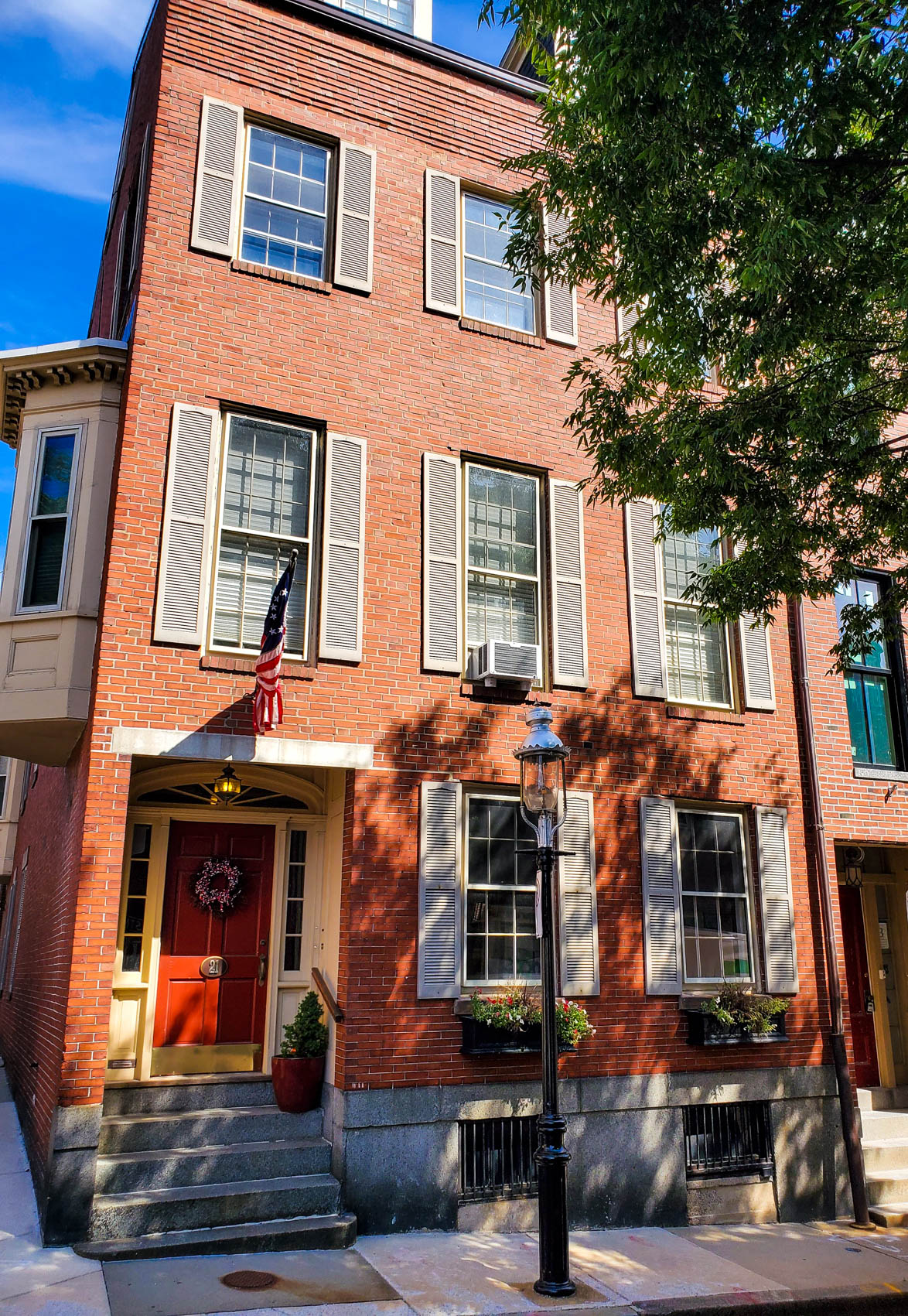 Charlestown was first settled in 1628 (two years before Boston) and covered a large area encompassing what is now Melrose, Malden, Stoneham, Somerville, Medford, Everett, Woburn, and Burlington, as well as parts of Arlington and Cambridge. Charlestown was its own municipality and the first capital of the Massachusetts Bay Colony before it was annexed to Boston in 1874.

In the summer of 1775, Charlestown was the site of the Battle of Bunker Hill, although most of the battle took place on the nearby Breed’s Hill. The town, including its wharves and dockyards, was almost completely destroyed by the British and was not fully rebuilt until the end of the hostilities.

Around the 1860s an influx of Irish immigrants arrived in Charlestown and the area long remained an Irish and Catholic stronghold similar to South Boston, Somerville, and Dorchester.

In 1800, Charlestown became the site of one of the original six yards created to support the young United States Navy. For the next 174 years, the yard served as a hub of innovation, an employer of skilled workers, and a home to naval officers, sailors, and U.S. Marines. When it closed in 1974, the Congress passed the Boston National Historical Park Act and one-third of the area (30 acres) was designated as part of the historical park. It is now the docking place of the USS Constitution (launched in 1797) and the World War II destroyer USS Cassin Young. The remainder of the park was turned over to the City of Boston for redevelopment, and is now a thriving residential neighborhood.

>>Explore Charlestown’s historic locations with this walking map by WalkBoston

The Charlestown Navy Yard is a 15-minute walk from North Station, one of Boston’s busiest transportation hubs. You can get to North Station via bus (4), subway (Green Line C & E; Orange Line), and commuter rail.

Another convenient option is to take the BHC ferry from Long Wharf for a quick scenic ride (about ten minutes). Boats run seven days a week and leave from Long Wharf every 15-30 minutes depending on the day and time.

You can also take the 92 or 93 bus from the Downtown Crossing area. The ride takes approximately ten minutes from Downtown Boston.

Charlestown is also easily accessible by public transportation from the Hynes and the BCEC.

Charlestown’s dining scene offers a lot of variety including traditional American fare, fresh seafood, as well as a wide range of international cuisines like Irish, Mediterranean, French, and more. Some local favorites include:

• Warren Tavern ($$), located at the intersection of Main and Pleasant streets, is the oldest tavern in the state. It opened in 1780 and, in its early years, was visited by George Washington and Ben Franklin, and is said to have been a favorite watering hole of Paul Revere.
• Pier 6 ($$) is a favorite Boston waterfront destination with panoramic views of the city skyline and harbor. The restaurants serves classic New England dishes with a focus on fresh seafood and local ingredients.
• Tangierino ($$$) is an authentic Moroccan and Mediterranean restaurant serving rich, flavorful dishes including the land and sea mezze, couscous, and traditional entrees all made from scratch.
• Monument Restaurant and Tavern ($$) is a gastropub offering American comfort food like wood-fired pizzas and a large array of craft beers. 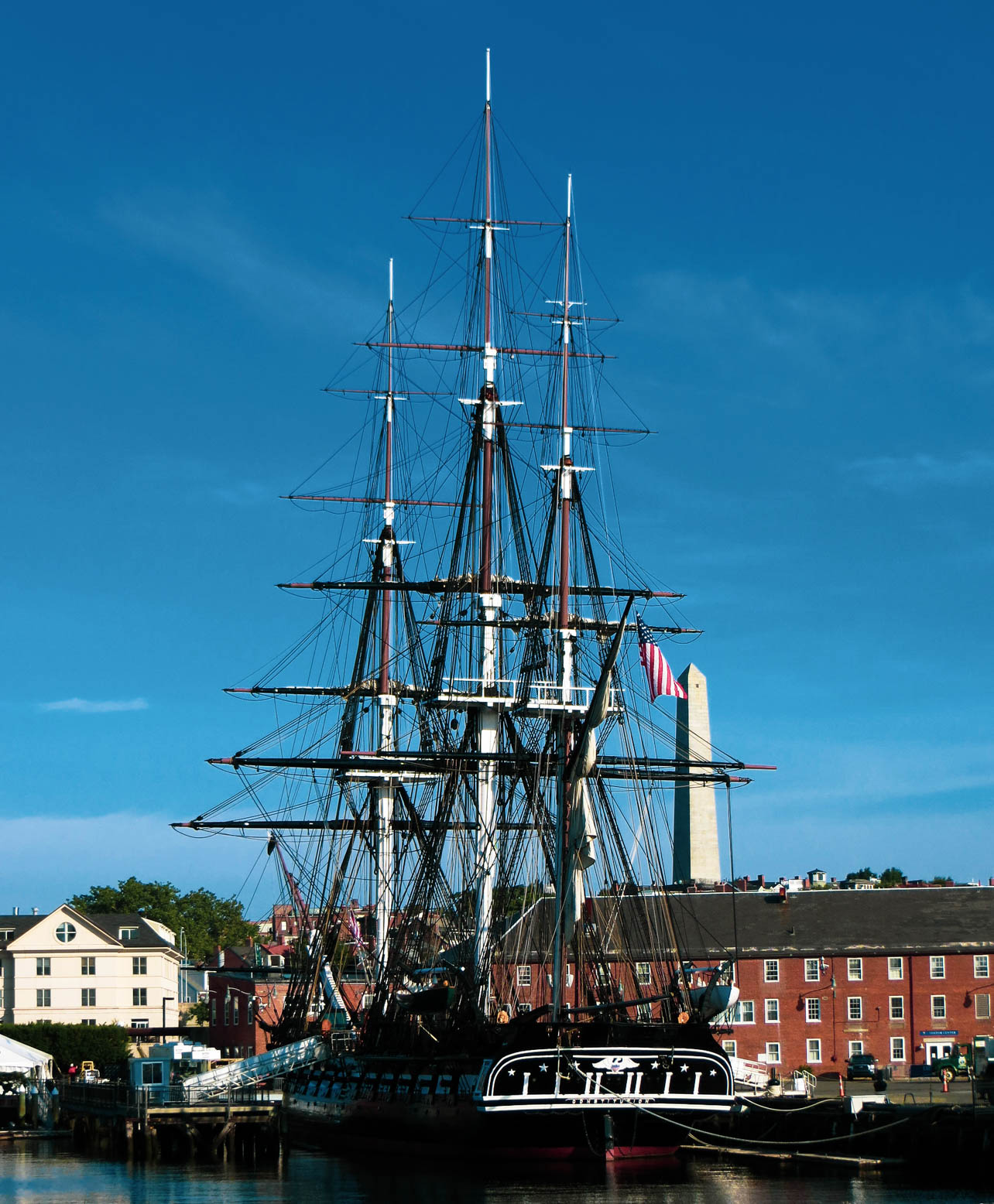 The USS Constitution is a well-traveled ship that has sailed along the West Indies, Brazil, and the West African coast and participated in the Barbary Wars. After more than 220 years, she is still a commissioned U.S. Navy warship with a crew of naval officers and enlisted personnel. You can take a free tour of the ship (suggested donation of $5-$10). To ensure safety, all visitors are required to go through a security screening and visitors 18 and older must present a valid federal or state issued photo ID at the ship’s entrance.

Located only yards away from “Old Ironsides,” the USS Constitution Museum brings the ship’s history alive and lets you not just learn about history – but experience it through interactive exhibitions and activities. 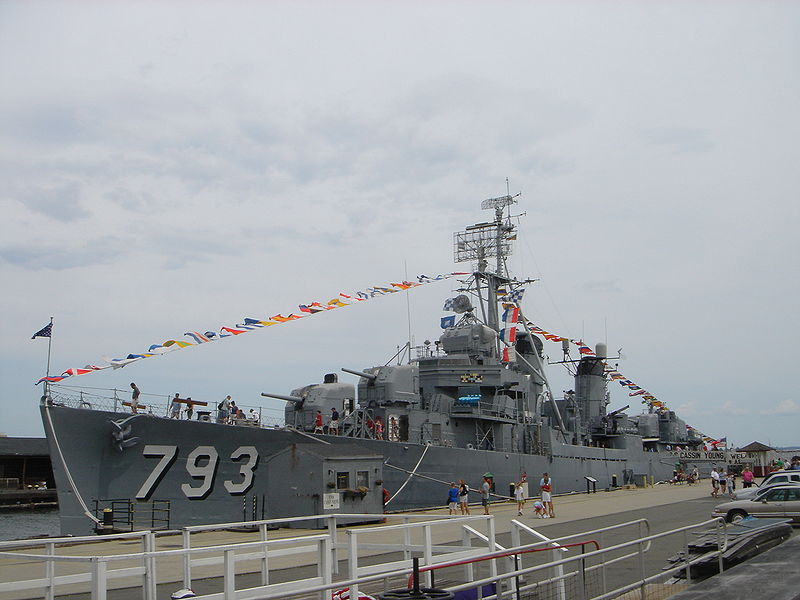 Built for speed and capability, USS Cassin Young engaged in seven Pacific battles in World War II, survived two Kamikaze hits, and served another full decade beyond her expected lifetime. Built in 1943 in San Pedro, California, she is one of 175 Fletcher-class destroyers built during World War II. The Charlestown Navy Yard built dozens of similar ships during the war. In the 1950s, Cassin Young and many other destroyers received regular repairs and modernization in Charlestown. 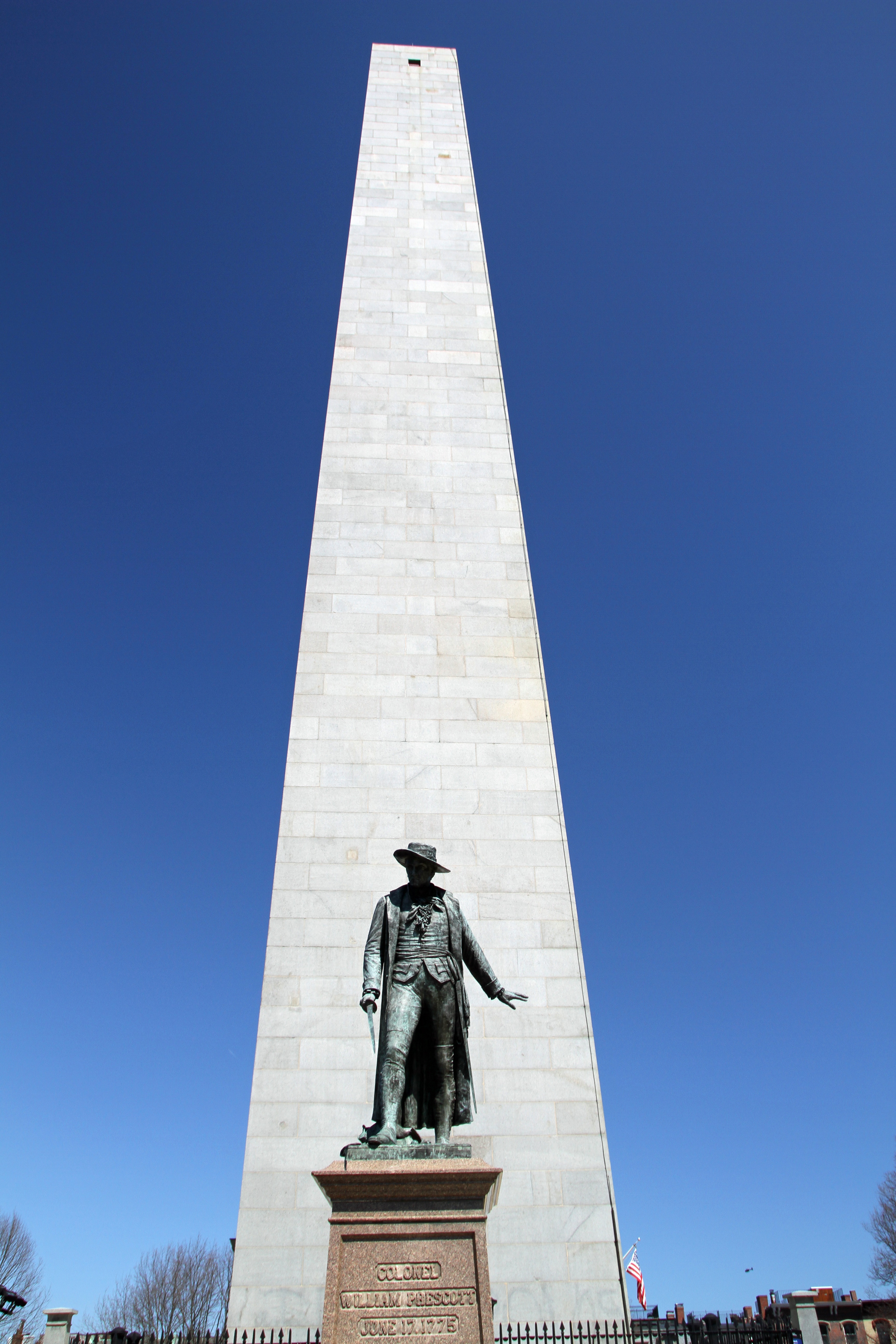 The Bunker Hill Monument commemorates the Battle of Bunker Hill and it’s been open to the public since 1842. The historic 1901 Bunker Hill Lodge adjoins the Monument and houses the statue of Joseph Warren, portraits, and a Revolutionary War cannon, “The Adams.”

Climb the 294 steps to the top of the granite obelisk to discover a stunning view of the city. It is free and open for climbing 10 am - 4:30 pm when conditions permit. 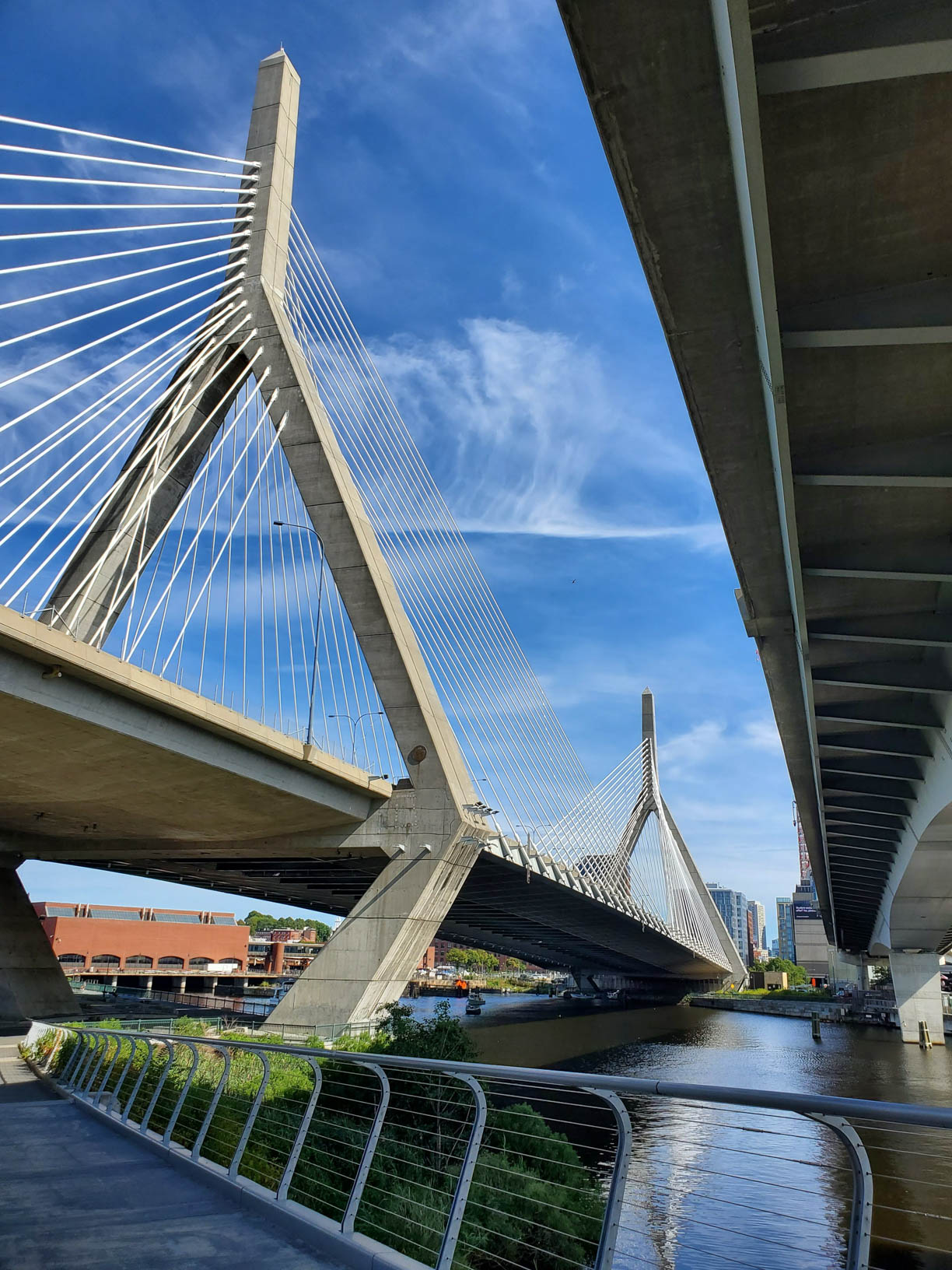 This hidden gem is located where the Charles River meets the Inner Harbor and features a large, grassy area with a stage for performances and a large, fenced-in playground. It also offers some of the best views of the city and Zakim Bridge – an iconic Boston landmark and one the widest cable-stayed bridges in the world.

A masterpiece of church architecture, St. Mary’s was one of the last important works of Patrick C. Keely (1816-1896), architect of over 700 churches, 40 of them cathedrals. The spectacular oak ceiling and its twelve angels demonstrate Keely’s genius at wood carving. The angels cleverly conceal the architectural device known as a hammerbeam. In a hammerbeam roof, there is no need for columns, which most every other church has. As a result, every person seated in the pews has an unobstructed view.

Catch up on our previous neighborhood guides about the South Boston Waterfront District, Back Bay, North End, and Beacon Hill.