Take a Walk through History with Boston’s Most Notable Architecture

In this week's blog written by our intern Marah Adams, a senior at at the Sawyer Business School of Suffolk University, we take you on a virtual tour of some of Boston's must see architectural landmarks.

Boston is one of the oldest cities in the country with some of the most notable buildings. The skyline reflects the city's iconic historical revolutionary past and its present-day creativity and innovation. Boston has a mixture of Federalist, Colonial, Romanesque, Greek Revival, International, and Brutalist styled buildings created or inspired by world renowned architects.

Next time when you’re exploring Boston on your free time, see if you spot any of these significant Beantown buildings! 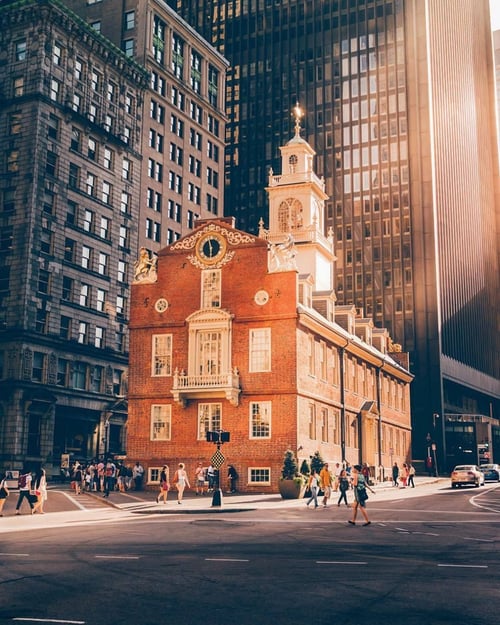 The Old Massachusetts State House is the oldest public building in Boston, built in 1713 in a Colonial style. It was the center of political, civic, and business life in the Revolutionary Era. The infamous Boston Massacre occurred in front of the building below the balcony. The Old State House is one of the stops on the Freedom Trail, or you can take a tour of the building itself to learn more about this historical landmark. 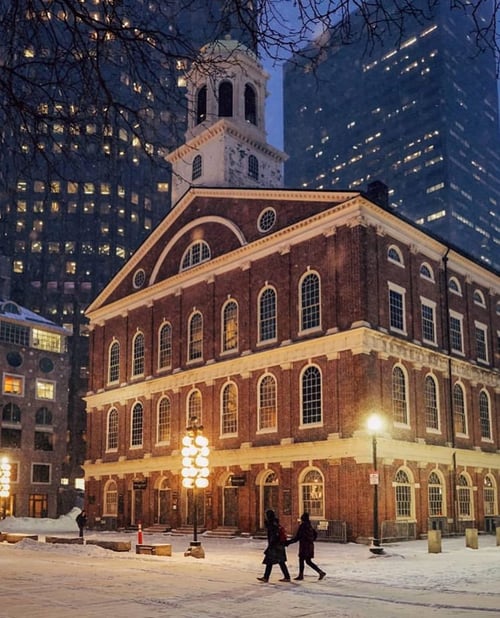 Peter Faneuil, Boston’s wealthiest merchant, built Faneuil Hall in Downtown as a gift to the city in 1742. Faneuil Hall Marketplace created a home for merchants, fishermen, and meat and produce sellers. The cobblestone promenade provides a space for street performers to entertain shoppers. The marketplace was originally a waterfront experience, however land was eventually filled in to where the Long Wharf is today. 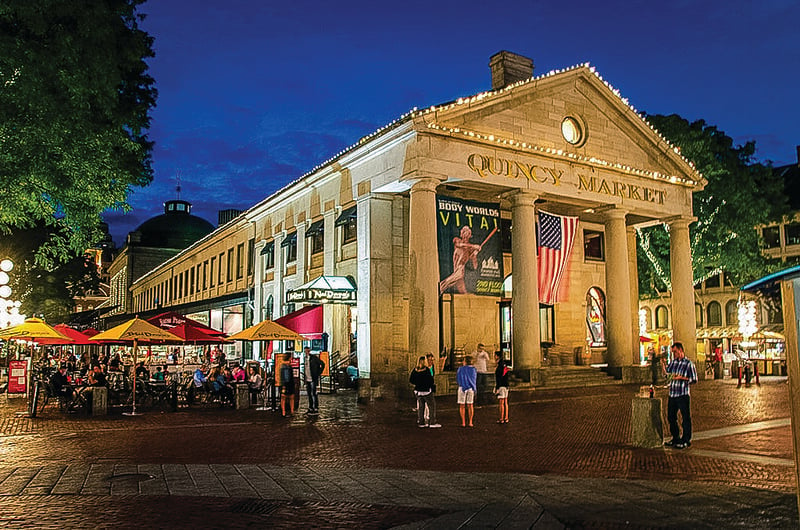 Josiah Quincy made plans to expand Faneuil Hall Marketplace by building Quincy Market in 1826. It was designed in a Greek Revival style by the famous architect Alexander Perris. As one of the most popular tourist attractions, it is the center of Faneuil Hall Marketplace, housing an extensive food court, restaurants, shops, and can also be rented out for private event functions. 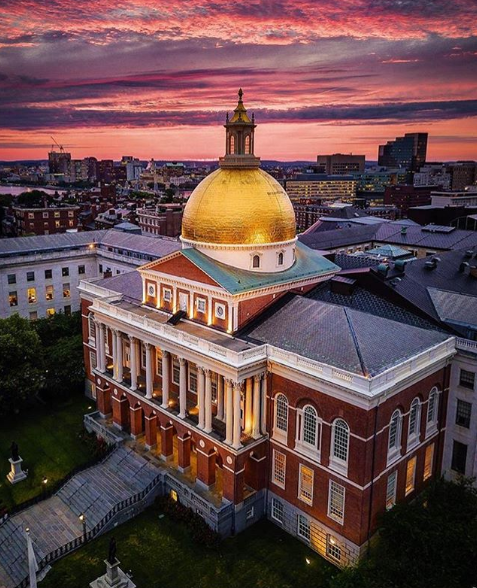 Opened in 1798 and designed by Charles Bulfinch, the Massachusetts State House is a beautiful example of Federalist architecture. It is located at the top of Beacon Hill, on land that John Hancock used to own, along the Boston Common. The dome, which was originally constructed from wooden panels, has undergone multiple transformations. It was gilded with gold leaf 1847, painted gray in WWII, and finally re-gilded with 24k gold in 1997. 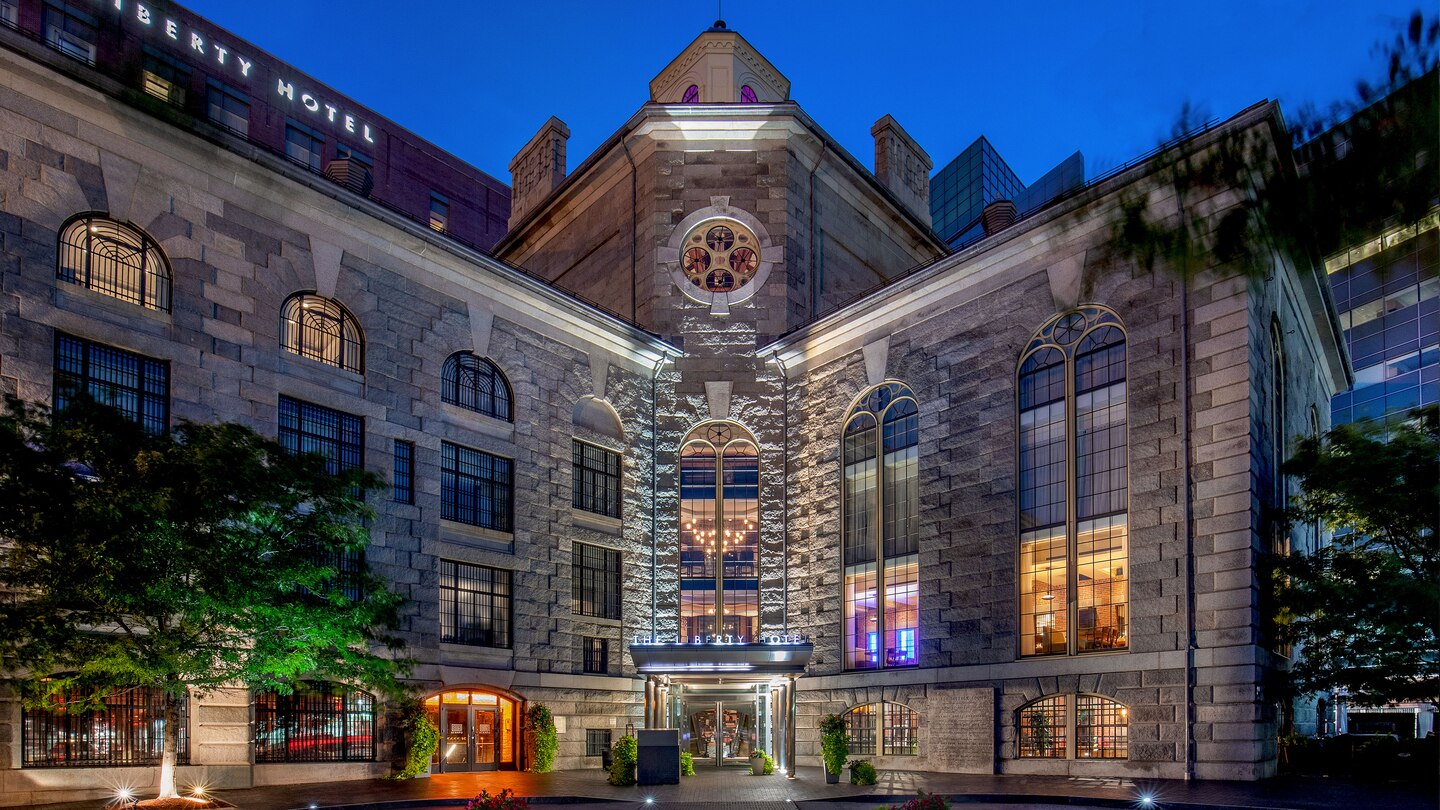 The Liberty Hotel was originally built as the Charles Street Jail in 1851, and was converted into the 300-room luxury hotel in 2007. Many of the original cell blocks and corridors remain. In the restaurant CLINK they have preserved jail facades as historical décor. Using a Romanesque and Renaissance form, Gridley James Fox Bryant designed the building to be in shape of a cross with a granite exterior. 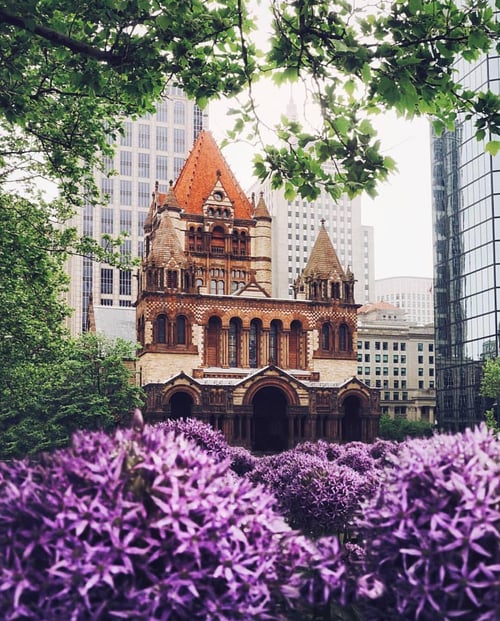 Trinity Church is the only building in Boston and the only church in the country to have been considered one the “Ten Most Significant Buildings in the United States” by the American Architecture Institute. Built in 1872, Henry Hobson Richardson was inspired by the Romanesque Revival style, leading him to create his own style later to be known as “Richardsonian Romanesque”. The floor plan is shaped like a cross and the building is mostly made of granite and sandstone. It is in the beautiful Copley Square of Back Bay. 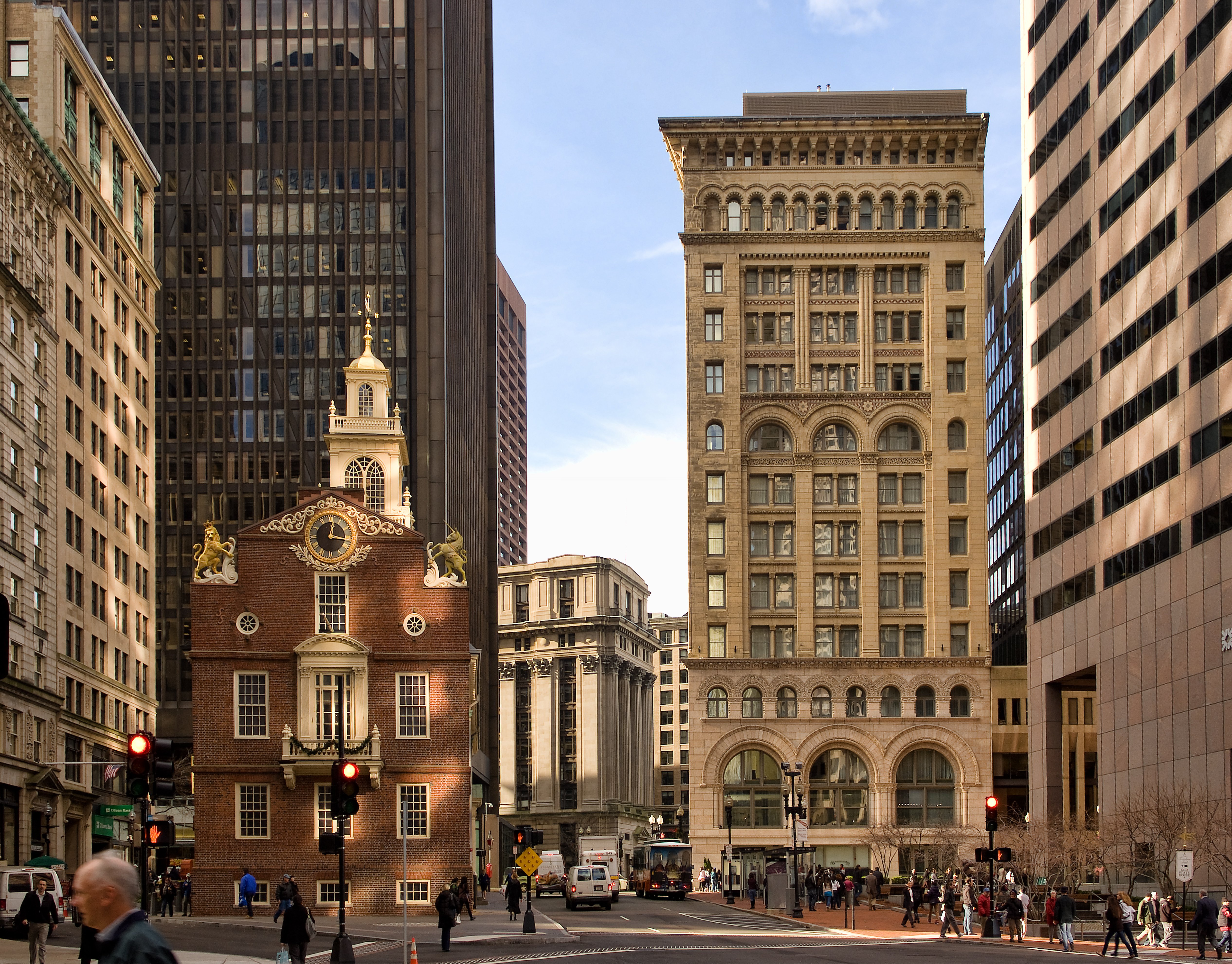 When it was built in 1893, the Ames Building was the tallest building in Boston with 13 floors and is considered Boston’s first skyscraper. The Ames Building was designed by the firm of Shepley, Rutan and Coolidge in Richardsonian Romanesque style and paid for by Frederick L. Ames. Located in the Financial District next to the Old State House, it was originally used for office space and then later converted to the Ames Hotel in 2007. The hotel shut down in 2019, and is now owned by Suffolk University which has plans to convert this landmark into a dormitory.

The Custom House Tower, one of the most distinctive buildings in Boston’s skyline, started off as just the base of the building. It was built in 1849 as office space for US Customs officials, authorized by President Andrew Jackson. After the tower was completed in 1915, it took the place of tallest building in Boston from the Ames Building. It has been a Marriott hotel since 1997.

The Berkeley Building, also known as the Old John Hancock Tower, was completed in 1947 to house the successful insurance company in Back Bay. The 26-story art deco skyscraper was designed by the firm of Cram and Ferguson. The unique feature of the coveted landmark is the beacon at the top that gives a weather forecast for the day by shining different colored lights. The weather forecast beacon decipher is: 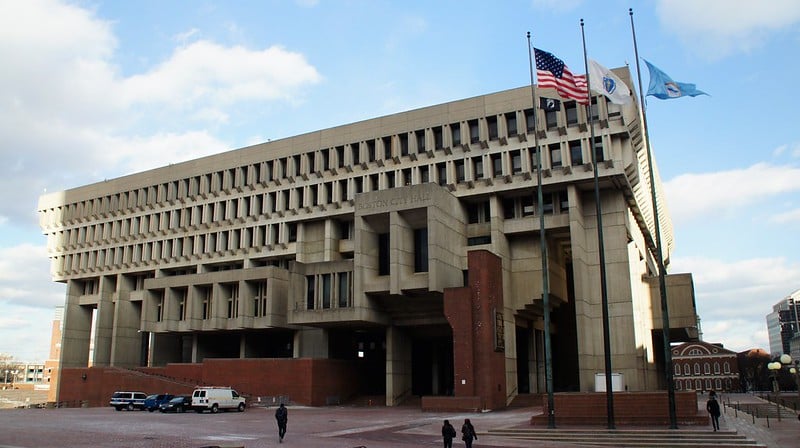 One of the most controversial architectural designs is Boston’s City Hall. Gerhard Kallmann, Noel McKinnell, and Edward Knowles won the international design competition that was held for the design of the new city hall in 1962. Its cement structure and Brutalist design have given it the title of one of the ugliest buildings in the world. However, a group of architects admire it so much that it is now a Boston landmark, protecting it from being demolished. Mayor Marty Walsh has plans to revitalize City Hall Plaza turning the dismal space into a greener, community-friendly area. 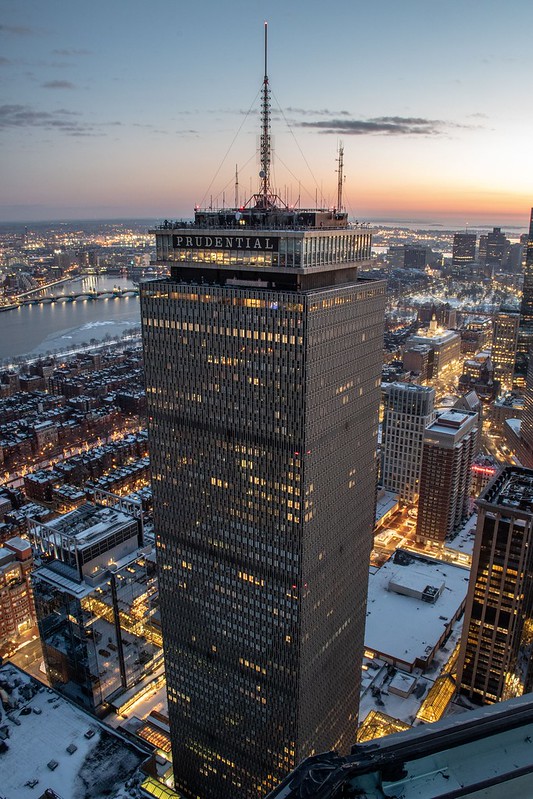 The Prudential Tower was completed in 1964 to spark urban renewal and offer more things to do in the city, since at the time there were no other buildings like it. Charles Luckman designed it in the International Style giving it a timeless look. It is the second tallest building in Boston at 750 feet with 52 floors that provides a 360 view of the city in the Skywalk Observatory. The Prudential Center is connected to Copley Place, Westin Copley Place Boston, Boston Marriott Copley Place, Sheraton Boston Hotel, and the Hynes Convention Center all under one roof, providing a unique, interconnected hotel, shopping, dining, and entertainment experience. 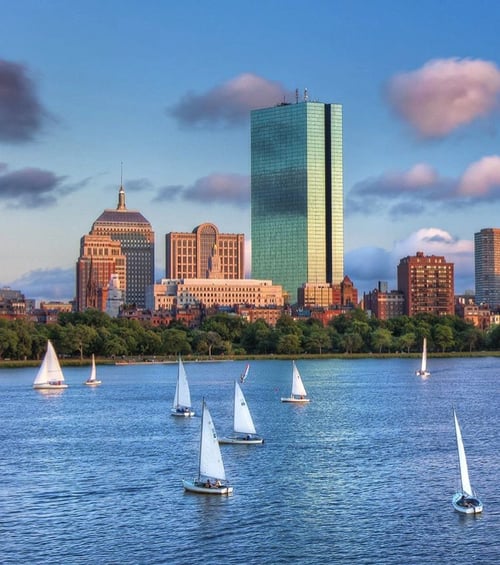 The tallest building in Boston and New England is 200 Clarendon St (previously known as the John Hancock Tower). Designed by Henry Cobb and completed in 1976, the 790-foot-tall and 62-story tower is one of Boston’s most prized possessions. The iconic all glass exterior reflects the surrounding sky and is what makes the skyscraper so mesmerizing. Due to a strict height restriction in the city of Boston, you probably won’t see any new buildings taller than 200 Clarendon in the foreseeable future.

With approximately 516,000 square feet of contiguous exhibition space, the Boston Convention & Exhibition Center is the largest convention center in the New England. It resides in the South Boston Waterfront District, Boston’s fastest growing and trendiest neighborhood. The convention center was designed by Rafael Viñoly in a Contemporary Style, opened in 2004, and is distinguished by the arched canopy at its entrance off of Summer Street. 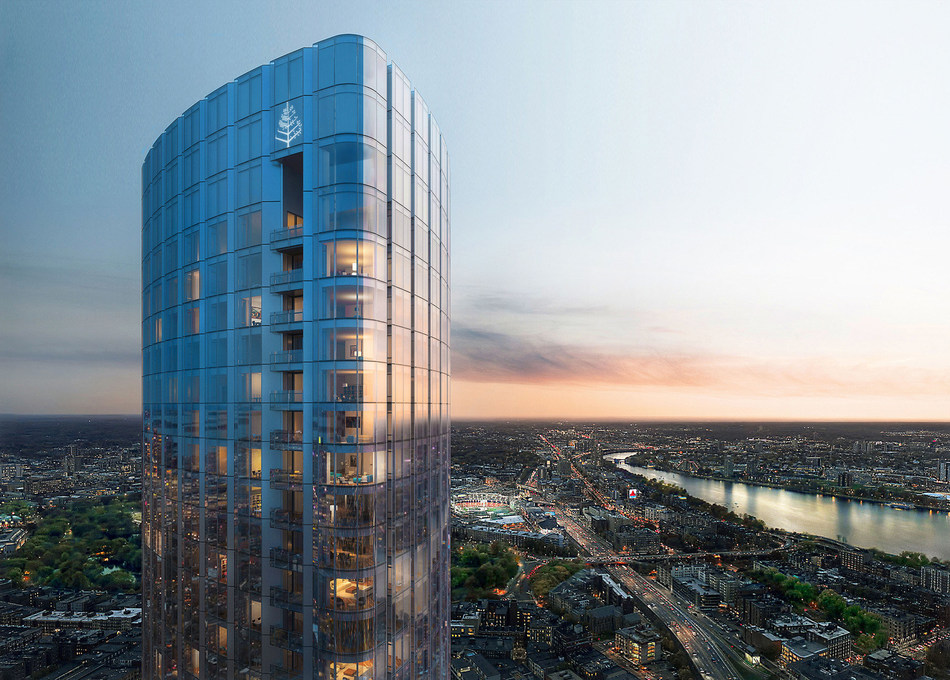 Designed by Henry Cobb, the same as 200 Clarendon (John Hancock), One Dalton Four Seasons is the third tallest building in Boston and the tallest residential building in New England. It was recently completed and opened in 2019. Standing 740 feet tall, a Four Seasons Hotel is located on the lower floors and luxury condos reside on the upper levels with many amenities throughout the building.

Boston is open for future bookings. If you need to change the dates of an event that hasn’t been accommodated by another city or are simply looking for a date in the future, don’t hesitate to reach out at sales@SignatureBoston.com.

For regular updates on the MCCA’s response to the COVID-19 outbreak, please go to https://sb.signatureboston.com/mcca-covid-19